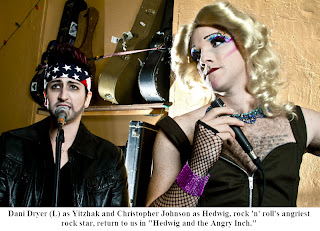 Raw punk rock theater isn’t everyone’s taste, but if you are young enough to appreciate just about anything raw, “Hedwig and the Angry Inch” is the musical you must see.

Trust me, people will be talking about this show for years. The sheer earbone-jarring energy, heart ripping poignance  and gender-trashed mashup won’t be equaled anywhere else around here.

Dramatically tall Christopher Johnson in drag is spreading every ounce of his life out on stage to portray Hedwig five more times this week – Thursday, Feb. 21, at 7:30 p.m. then continuing at 7:30 p.m. and 10:30 p.m. on Friday and Saturday, Feb. 22-23, always downtown at the Screening Room, 127 E. Congress St. (across the street from the Chicago Store).

Stepping up as Hedwig’s angry associate, the weary-eyed Yitzhak with his perpetual five o’clock shadow is the convincing Dani Dryer.

The Screening Room with its long narrow bomb shelter shape contributes to this intimidating atmosphere, perfect for the story of Hedwig’s underground life in East Berlin with Soviet soldiers on patrol along The Wall and suppressing everyone.

“Hedwig and the Angry Inch” tells the story of  “internationally ignored song-stylist” Hedwig Schmidt, a fourth-wall smashing East German rock 'n' roll goddess who also happens to be the victim of a botched sex-change operation, which has left her with just “an angry inch” you know where.

Posted by TucsonStage.com at 6:48 AM