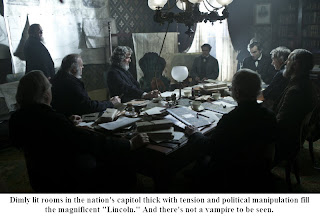 The practice of politics, just like the creation of art, is never pretty. We all know this, we just don’t want to think about it.

The magnificent “Lincoln,” as directed by Steven Spielberg and acted by Daniel Day-Lewis in the title role, has become the perfect deep-dish example. Both art and politics are laid out for us to observe, although the innards of “leadership” are easier to label.

Day-Lewis has always been famous for his uncanny ability to disappear into a role. In portraying the folksy Illinois log-splitter, Day-Lewis outdoes himself. Not only does he disappear into this presidential role, but he creates an Abraham Lincoln distinctly different from 150 years of Honest Abe’s public persona.

We meet the great man in the last months of his life, determined to wheedle and knoodle his opposition into supporting the abolition of slavery.

There is only one grisly battlefield scene, placed in the film’s opening minutes, which is used to set up a recitation of the Gettysburg Address a bit later by a pair of African-American soldiers on the Yankee side.

About 90 percent of the 2 ½-hour film takes place indoors, appropriately smoky and damp since the nation’s capitol was not yet wired for electricity. The attention to such details of atmosphere is so thorough, it often seems like you can smell the wet wool of those heavy suits all the men wore.

While the subject of this big screen history lesson is passing the 13th amendment to the Constitution, freeing  all slaves, there are no scenes of sonorous triumph. Instead, we’re always down in the political trenches, getting gritty and getting revenge, appreciating the latticework of skullduggery that’s still required in Washington to get anything done.

As seen today, with the nation facing an equally difficult crossroads to the future, it is a much more important lesson to remember.

Posted by TucsonStage.com at 8:41 AM