MAKE ROOM FOR "REGRETS ONLY" 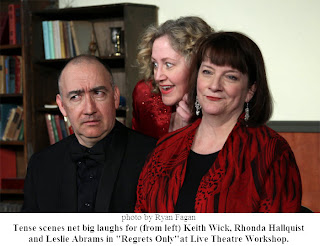 Projecting two weekends of sold-out performances for Paul Rudnick’s contemporary comedy “Regrets Only,” it sounds like Live Theatre Workshop has another hit on its hands.

“Regrets Only” is set in way upscale Manhattan during the last Bush administration (apparently, though George Bush is never named). Rudnick has created an interesting mash-up of satirizing materialistic manners among the wealthy and opening closed minds on the subject of marriage in the gay community.

There are lots of inside jokes about fashion designers and the socialites who love them – or at least love their designs.

Keith Wick does most of the heavy lifting onstage playing celebrity designer Hank Hadley. He finds the right note of innuendo in every seemingly innocent comment.

At the performance I attended, many of these jokes were tossed off as throwaway lines that didn’t get all the laughs they deserved.

Audience members who listen carefully will be amply rewarded.

The set-up begins with heaps of witty banter between Hank and  Lesley Abrams as overly enthusiastic Tibby McCullough, Hank’s eager friend and most devoted customer.

We can slowly gather that Hank is upset his longtime partner in life has died before the government could pass any legislation recognizing same-sex marriage.

The implied heartbreak is rushed over as an equally robust Michael Woodson as Tibby’s husband Jack thrusts himself into the conversation, proudly announcing the President of the United States (who is also Jack’s buddy) wants Jack to prepare a definition of marriage so bulletproof there is no risk any gay couples will ever get married in America.

Hank is aghast that Jack would even consider such an assignment. So is Tibby. But Jack is equally taken aback that his wife and her friend Hank can’t imagine how much this presidential assignment means to Jack and his own career.

But not to worry, audience members. “Regrets Only” is an entertaining comedy that director Sabian Trout keeps zipping across the well-furnished LTW stage.

Adding comic complications are Amanda Gremel as the McCullough’s daughter who insists on having her own ultra-conservative wedding ceremony, and Rhonda Hallquist giving another hilarious turn is Myra the family maid who can never resist making fun of her employers.

Myra gives her scenes tremendous momentum, which is matched in the second act by Pat Tim as acerbic Marietta Claypoole, the hard-as-nails mother of Tibby.

Madcap Manhattan merriment with an edge is what we get. It’s always fun to watch stuffed shirts be made to look foolish, especially when they get hung out to dry on the horns of a rather ingenious dilemma.

Reservations are being absolutely recommended for the remaining performances of “Regrets Only” at Live Theatre Workshop, 5317 E. Speedway Blvd., running through March 24.

Curtain on Fridays and Saturdays is 7:30 p.m., Sunday matinees at 3 p.m. All tickets are $18, with discounts available. For details and reservations, (520) 327-4242 or visit www.livetheatreworkshop.org

Posted by TucsonStage.com at 4:57 AM