"THE WRECKING CREW" FOR SURE 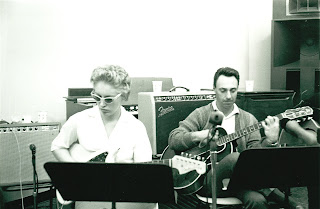 For me, the most iconic moment in “The Wrecking Crew” documentary was seeing this grizzled, old pot-bellied guy playing the drum part on a hit studio recording everybody thought was made by a band of rebellious young rock ‘n’ roll lions.

Documentary filmmaker Denny Tedesco, son of the late legendary Wrecking Crew guitarist Tommy Tedesco, has made it his life’s work to tell the story of some 20 studio musicians in the late 1960s and early 1970s who provided the rhythm sections and  played all the horn solo hooks for the biggest rock ‘n’ roll hits of the day.

On the street and in the recording studio they were called The Wrecking Crew. Do we know who they are?

Of course not. There was no fine print on the backs of those vinyl albums listing who played on each track. The good news is, these top quality musicians reportedly did get paid well for their work.

Not as much money as the Beach Boys themselves, but a lot better than the guys who backed all those Motown singers in Detroit.
The whole tale will be told on Thursday, Feb. 7, when “The Wrecking Crew” gets screenings at 3 p.m. and 7 p.m. at the Loft Cinema, 3233 E. Speedway Blvd. Tedesco and veteran record producer Snuff Garrett will be on stage to introduce the film, talk about recording studio life in those days and take questions from the audience.

From "Be My Baby" to "California Girls," "Strangers in the Night" to "Mrs. Robinson," "You've Lost That Lovin' Feelin'" to "Up, Up and Away," and from "Viva Las Vegas" to "Mr. Tambourine Man," members of The Wrecking Crew played on all of them. For six years in a row during the late 1960s and early 1970s, the Grammy for "Record of the Year" went to Wrecking Crew member recordings.

So far, Tedesco’s “The Wrecking Crew” documentary has played around the world on the festival circuit with over a dozen awards, rave reviews and other accolades.

Clips from more than 130 of the biggest radio hits they made are also heard – which is the problem because the licensing fees to include these songs in the documentary cost more than $300,000. But without paying those fees up front, the film cannot be released by a movie distributor or signed for a DVD release.

“So we’re taking the film around the country, hoping to raise that $300,000 so we can get the film released through a distributor,” said Tedesco.
The next stop is Tucson. It is quite a remarkable story. Read all about it at http://www.wreckingcrewfilm.com and www.loftcinema.com
Then come see “The Wrecking Crew.” Tickets are General Admission: $12 • Loft Members, Students & Seniors: $10.

Posted by TucsonStage.com at 5:25 AM