SO SWEET, THOSE "FIRST KISSES" 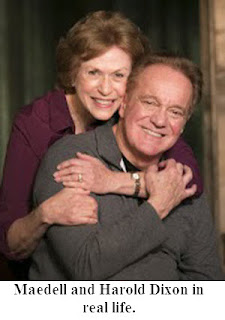 If you’re longing to experience the endearing innocence of, say, heartland America in the 1950s, try the life cycle that’s spinning through Invisible Theatre’s production of “First Kisses” by Jay D. Hanagan.

Sweet scenes will stir soft nostalgic smiles as veteran actors and real-life married couple Maedell and Harold Dixon play Mary and John from age 11 to age 72 during the years from 1951 to 2012. There are no other cast members.

During their careers the Dixons were institutional pillars of the theater faculty at the University of Arizona. Now they are retired and dedicated to continuing their lives as actors based in Tucson.

They first met when Maedell was 14 and Harold was 15. They married seven years later and have been living happily ever after for 41 years. Their family includes two children, one son-in-law and two grandchildren.

Knowing this history adds a glow to their performances as Mary and John -- a couple of middleclass kids working on their middleclass contingencies while growing into adolescents, then love-challenged young adults, then responsible married adults caring about their own children – and then surviving the frantically  responsible married adult time when their own children became sexually active.

There are no recreational drugs or angry rock ’n’ roll, though. Gail Fitzhugh as director has also picked a pop song to introduce each of the eight scenes on this journey. All the tracks are pretty easy listening, with no punk rock, Goth, psychedelic or otherwise antisocial sounds to be heard.

The set design by James Blair and Susan Claassen includes an exceptional treatment of the walls around the Invisible Theatre stage, covering them in full-size paintings of trees. At the center of these “woods” is the tiny cabin that becomes a special hideaway for John and Mary.

When we meet them as 11-year-olds, their families own adjacent homes at the edge of these woods. The two children discover not only are they neighbors but they were actually born on the same day in the same year.

Being 11, doing stuff like kissing sounds just too gross. But they can be best friends, and talk about their pet hamsters.
Eventually, just before intermission, John and Mary do kiss.

But it still takes awhile before they reach that part about marriage and the baby carriage. What’s nice to know about “First Kisses” is nothing too bad ever happens.

We are in safe hands with these two actors. And when it comes time for Mary and John to be in real love, Maedell and Harold won’t be acting.

“First Kisses” continues through March 3 with performances at 7:30 p.m. Wednesdays and Thursdays, 8 p.m. Fridays and Saturdays, 3 p.m. Sundays. Tickets are $28, with group discounts available. For details and reservations, (520) 882-9721, or visit www.invisibletheatre.com


Posted by TucsonStage.com at 8:32 AM