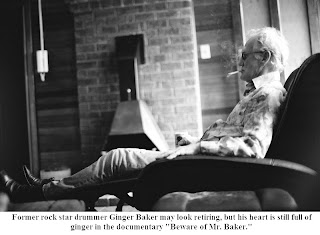 Not many documentaries are remembered for their driving power. “Beware of Mr. Baker,” now playing at the Loft Cinema, 3233 E. Speedway Blvd., is one that will.  And not just because it is full of clips from mad drummer Ginger Baker’s many refusals to constrain himself in any situation.

Written and directed by the entrepreneurial Jay Bulger -- inspired by the Baker interview from a few years earlier that Bulger talked himself into by pretending he was on assignment for Rolling Stone – the real power is in the editing and soundtrack.

Baker is so cantankerous we can only guess why Bulger is so fascinated by the drummer’s vigorously obstructive personality.
But ever since childhood, apparently, Baker’s fear of rejection kept him in a continuous state of rejecting all friendships from everyone – even his own family.

Running away was his MO, especially if he could go on tour and just keep running.

Drumming was another escape. The naturally gifted boy who never studied drums but just played them understood how to create the landscapes and layers of rhythms in his head. It was said he could keep four different rhythms going at the same time – one with each hand and foot.

For anyone who was a teen in the 1960s-70s, plenty of clips from Baker’s bands (notably Cream and Blind Faith) keep the music center stage. Eccentric behavior is what prevents this doc from being a mere nostalgia trip.

We’re also struck by the emotional consequence of these recordings. Compared with today’s pop music preference for anger and the emphasis placed on style, “Beware of Mr. Baker” is filled with songs shooting straight from the unrestrained heart.

While there is some historical merit to interviews with other iconic musicians of the period, notably Eric Clapton, it is easy to hear the difference between Baker’s drumming and the simplistic pile-driver time-keeping of such legends at Keith Moon and John Bonham.

Baker was born in August, 1939, at the very beginning of World War II. His father died a war hero in the conflict. But the strong willed younger Baker ran wild at home, with no positive male role models available.

He discovered bebop jazz while rummaging around in record stores as a young teen with his mates. He loved jazz at a time when all the other kids were playing blues and then rock. Baker joined various blues bands, but he was always playing drum rhythms that were far more complicated than everyone else.

Fame soon followed. However, given Baker’s uncompromising attitudes, that only made life more complicated. Drug use became rampant, as well.

Baker’s odd but well-known love for polo came about while the musician was doing African drum research in Lagos, where he also met (pre-Broadway show) the drummer and political activist Fela Anikulapo-Kuti.

The core interview with 73-year-old and energetically grumpy Baker takes place in South Africa where the one-time rock star lives with his fourth wife and a couple of children. As the tale is told, with those rough clips adding atmosphere, it is the miracle of Baker’s playing that builds the power.

In the rock world, no one appreciated how good Baker really was. If he could have found a niche in the jazz world, today red-haired Ginger Baker would be hailed as a genius.

Posted by TucsonStage.com at 5:24 AM