"CAESAR MUST DIE" IS FILLED WITH LIFE 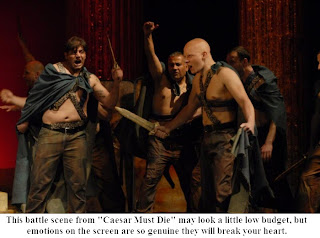 If ever a film transcended its description, that film is the Italian release by the Taviani brothers, “Caesar Must Die.” If the following description sounds mundane to you, do not be fooled.

If you believe in the uplifting, redemptive power of art, you must see “Caesar Must Die.”

Paolo and Vittorio Taviani (“Padre Padrone” was their first film) have gone to the Rebibbia prison on the outskirts of Rome. The place is filled with drug dealers and Mafiosi, hardened men whose life of crime was interrupted by a judge’s sentence.

Every year the prison allows its inhabitants to stage a play. This particular year it is “Julius Caesar.” The Tavianis are not staging the play themselves, they are only taking us into the six-month rehearsal process and the opening night performance.

Their acting skills feel surprisingly well-developed. It is easy to imagine that all criminals living by their wits are finely-tuned to the public image they project. Which is that same talent all actors possess. These criminals have been acting their entire lives – as if their lives depended on it, which it has.

Perhaps the editing is also responsible for showing these complicated men giving such heartfelt performances as Julius Caesar, Brutus, Marc Antony and the others.

A precious gift in the film is showing us real faces lined by real fears, baggy eyes filled with troubles and tensions, slack jaws shaped by cheap food and countless nights of tortured sleep.

And always behind each face burns every prisoner’s shame at getting caught and that grinding desire to finally be free again.

As the film begins in a rehearsal of the play’s final scene, with Brutus pleading for compatriots to kill him, we are slapped with the brutal truth that movie stars portraying scenes from the criminal world have never lived lives anywhere close to the real thing.

These men have. For them, “Julius Caesar” is a natural fit. All that intrigue, all that conniving, all that strategic use of power. They intuitively understand these matters, not by imagining but by remembering.

Most of the film is about the drama of rehearsal, gradually coming to portray how much the play means to each of the participants. Rehearsal is a mental escape from their daily drudgery, not just by having a different routine but having the chance to enter a world shaped by Shakespeare’s language.

The telling of this tale clocks in at a brisk 76 minutes, centering on Caesar’s suspicions, Brutus’ betrayal and subsequent pleas for an assisted suicide.

But what you will remember – guaranteed – are those faces. Dickens couldn’t have done it better.

Posted by TucsonStage.com at 3:11 PM