"THE CALL" IS GENUINELY THRILLING 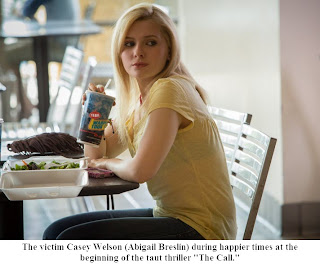 Talk about your cheap thrills. Buy a bargain priced ticket to see Halle Berry in “The Call” and you’ll get way more than your money’s worth. Berry may be looking rather anorexic in her jeans and work shirts but her performance as Jordan Turner, a Los Angeles 911 dispatcher, packs a mighty cinematic punch.

Consider this the break-through movie into mainstream success for indie darling Brad Anderson (“The Machinist,” “Transsiberian” and TV episodes of “Treme” and “The Wire”). Anderson keeps cranking the tension like a hyperkinetic piano tuner, pulling each string tighter than you expect.

That’s the thrilling part – there is no emotion so extreme it can’t be teased a little tighter. How does Anderson do it? Maybe 10 years from now college film class professors will know why “The Call” is such a blood pressure percolator.

But those of us who just want to be thrilled can kick back in a theater seat facing a giant screen with wraparound sound, our laps full of popcorn and sweet carbonation, to let our hearts race at redline speed into the unknown.

To this scenario we can add Casey Welson, the damsel in distress played by Abigail Breslin (all grown up since “Little Miss Sunshine”). As the helpless victim Casey spends most of the movie confined in tight places or strapped into even tighter ones, looking terrified. She does pretty good at that task, while waiting for Jordan the 911 operator to figure out a way to save her.

Every hero needs a formidable villain and Michael Eklund plays Michael Foster, looking very suburban in the beginning, who becomes quite believably frayed and frantic as his frustration builds. That’s when we discover he is, on the surface, one of those polite and quiet fellows with a responsible family who spends his nights behind a locked door in his hobby room obsessing over his past.

The plot sketch sounds deceptively routine. Jordan gets a call from a teen girl being kidnapped, but the call is from one of those throw-away cell phones that can’t be traced. So we watch stressed out Jordan the 911 dispatcher is at one end of the call and frantic Casey at the other.

Most of the action is Michael torturing Casey in various ways while Jordan feels increasingly helpless. Everything kicks up several notches when Jordan finally does leave the 911 center to take matters into her own hands.

THESE “SUNSHINE BOYS” ARE SUNNYAfter more than 40 years of America’s so-called culture wars, our nation’s sense of humor has taken a pretty wide swing.  Before Lenny Bruce, Richard Pryor and all that bunch began beating us over the head with their shock wave punch lines, the best jokes had to be clever (since they weren’t allowed to be sexy).

They still are in Arizona Theatre Company’s sprightly production of Neil Simon’s “The Sunshine Boys,” which premiered on Broadway in 1972. Sure that was over 40 years ago, too, but these jokes aren’t any more out of date now than they were in 1972.

David Ira Goldstein as director plays it straight, rather than campy, never making fun of the dated ways that very old school Willie Clark (Peter Van Norden) and Al Lewis (David Green) depend on to get through their senior citizen years.

Back in the early times of black & white TV, it was the old pre-war vaudevillians who provided most of the comedy content for prime time evening shows. Simon wanted to pay tribute to those entertainers whose shtick has practically become a lost art form.

Goldstein wants to, as well, encouraging Norden and Green to give their conversation a venerable soft shoe suppleness that carries the play along. Their phrases are peppered with antiquated backstage terms they have used for 50 years, their daily jibs at each other sound like take-offs on stock comedy routines from traveling medicine shows.

Van Norden has the larger, more showy, role as the irascible Willie Clark in his rumpled, striped pajamas always slumped in front of a creaky TV with rabbit ears and aluminum foil.

Green dresses better,  is more patient and satisfied with life as Clark’s former partner in comedy, yet neither one of them wants anything to do with the other. No how, no way.

In service to Simon’s play, both Van Norden and Green must become lovable old grumpy guys. If the audience doesn’t sympathize with their determination to maintain some kind of dignity in their old age, there is no play.

Mixed in with all the genuinely funny one-liners from Simon is the substantial schmooze-ability of these two actors.

Essential to this balancing act is the performance of Tucson favorite Bob Sorenson as Ben Silverman, the nephew of Willie. Ben is the catalyst who insists Willie and Al drop their 11-year feud and re-unite for one last time so they can be honored on network television.

But the plot, really, is never the point. What we love is the vaudeville spirit of Willie and Al, a stage hit for 43 years but an off-stage disaster.

Offstage, maybe they genuinely are as compatible as oil and water. We don’t care. What we want is the onstage magic they have together.

“The Sunshine Boys” continues through March 23 with performances at various times Tuesdays through Sundays at the Temple of Music and Art, 330 S. Scott Ave. Tickets begin at $35, various discounts available. For details and reservations, 520-622-2823, www.arizonatheatre.org

Posted by TucsonStage.com at 7:50 AM