THIS "WICKED" IS WICKED GOOD 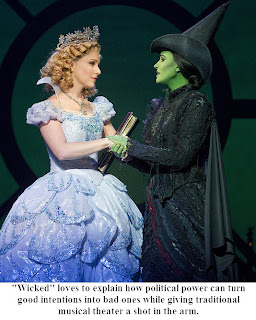 Tucson fans of big time musical theater, you can relax and go buy a ticket to “Wicked.” Yes, a touring production of this Broadway behemoth was here two years ago. But the new presentation, booked by Broadway in Tucson, is so far superior there is no comparison.

Even if you saw the one from 2011, if you have ever loved this musical or think you might love this musical, the production presently playing at the downtown Tucson Music Hall is absolutely the one to see.

Everything is bigger. The voices. The choreography. The costumes. The sets.

Framing the stage is a massive conglomeration of cogs and wheels like the ones that filled hand-wound clocks from pre-digital times, while numerous visual references to time and illusion are continued in the set design by Eugene Lee.

The gymnastic voices of Dee Roscioli as the green-hued witch Elphaba and equally agile Jenn Gambatese as the glowing blond goody-goody Glinda play hopscotch and leap frog all night long. Each seizing every opportunity to one-up the other in this story that is as much about politics as it is about what made the Wicked Witch of the West so mean in those stories about “The Wizard Of Oz” written by L. Frank Baum way back at the beginning of the 20th century.

The flying monkeys are in there, too, more like simmering slaves than the angry rebels we see attacking the reign of the little man behind the curtain.

Glamorous costumes are spread among the chorus, with choreography from Wayne Cilento that lifts the spirits of this book based on the dark 1995 novel by Gregory Maguire.

The songs and lyrics by Disney’s corporate captive Stephen Schwartz (“Pocahontas,” “Enchanted,” “The Hunchback of Notre Dame”) aren’t the kind that make you want to whistle, but they do capture a mood. We feel the endless frustrations of Elphaba and the phony sunshine of Glinda – cleverly manipulated so we cheer the green witch and see through Glinda’s public personality of Pollyanna with a magic wand.

Please note, “Wicked” is not a kid show. While the lyrics could not be clearly heard on opening night, the plot is driven by grown-up notions of prejudice and entitlement.  With a running time of 250 minutes (including intermission) it does take awhile before Elphaba finally gives up and goes over to the dark side.

Maguire’s book caught people’s attention by portraying the Wicked Witch as a good person who wanted to attack the autocratic reign of the Wizard.

Winnie Holzman’s Broadway book for “Wicked” does get bogged down in trying to make these points though we do feel sorry for Elphaba even as we see where Glinda has a far more intuitive understanding of the link between politics and popularity.

As the big-time theater critics have often noted, “Wicked” works best when you don’t think about it too much, but just give yourself up to the charm of Schwartz’s always accessible songs.

Posted by TucsonStage.com at 9:38 AM