"OZ" NOT SO GREAT AND POWERFUL 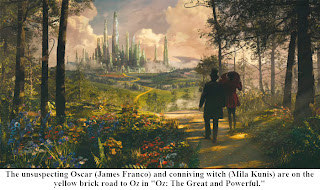 The yellow brick road is still the main drag through the old Land of Oz, it just isn’t merry in “Oz the Great and Powerful.” Just like in that 1939 classic, the 2013 “Oz” starts off in black and white, but now with a richly designed look that implies this backstory of how the Wizard of Oz came to power is being told by someone rather wealthy.

Such as the Disney Corporation.

Even though Sam Raimi is at the helm, it’s clear he’s still smitten by the magic of elevated digital technology that seduced him right about the time he made the first “Spider-Man” movie in 2002.

James Franco has the title role, looking thin and acting rakish as a carnival magician with several girlfriends among the other families of jugglers and acrobats dragging their gypsy wagons through dusty Kansas in 1905.

A first impression is that Franco’s been miscast. He completely lacks the corpulent charisma of the jovially flamboyant Frank Morgan as the 1939 Wizard of Oz.

OK, so that was then and this is now, this being a prequel and all. Maybe in a couple of decades this skinny trickster will start to look like the “real” Wizard…about the time Dorothy and her pals get to Munchkin land. It could happen.

In pretty short order, we meet these circus folk and watch them get blown by another tornado straight to the Land of Oz, where everything is in color.

Just generally know everyone there is waiting for the arrival of their next great wizard leader. This new Oz (real name Oscar) keeps insisting he’s not the one, especially since a couple of particularly mean-spirited witches keep trying to kill him.

On his side is Michelle Williams as Glinda the good witch. So we wait through a very long middle portion while Oz the reluctant keeps escaping one witchy assassination attempt after another.

Of course we know Oz will not only survive but get his dander riled up enough to fight back and be victorious. Nonetheless, Raimi keeps throwing things at the audience (in the 3-D version), piling up the “boo” moments and pumping up the pace.

There are some sweet parts in there, too, which work well enough as Glinda and Oz take a liking to each other. A couple of tykes tossed in there to amuse the little ones are the friendly flying monkey Finley (voiced by Zach Braff) and the porcelain but defiant China Girl (voiced by Joey King).

Regardless of its flaws, all the short-attention-span youngsters should love “Oz the Great and Powerful.” Just don’t plan on this one ever becoming a Classic II.

Posted by TucsonStage.com at 3:20 PM