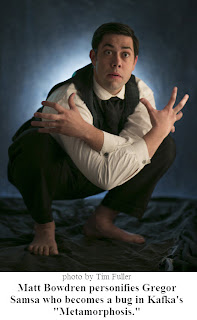 There is rich nostalgia in the Rogue Theatre’s newest production, a pair of one-acts based on the writing of Franz Kafka: “Kafka’s Monkey” and “Metamorphosis.” The nostalgia is for that time of imagination-stretching ruminations before the rumbling 1950s civil rights movement gave way to our so-called present day culture wars.

It is a bit difficult to imagine now, but before intellectual discourse became consumed with issues of race, gender, recreational drugs and rock ’n’ roll, people gave considerable thought to the nature of humanity and the depth of morality outside of religious obligations.

Rogue remembers, and now Rogue celebrates by giving everyone a chance to have their imaginations truly stretched while watching “Kafka’s Monkey” and “Metamorphosis.” Both are one-act plays raising deeper ethical questions of exactly what it means to be human.

“Metamorphosis,” the most familiar and theatrically complicated of the two, features a brilliant performance by Matt Bowdren as the unfortunate Gregor Samsa who wakes up one morning to discover he has become a giant-sized disgusting looking insect creature.

Rogue’s own co-founder Cynthia Meier has adapted and directed this play with clear lines that give the psychological shock waves of Gregor’s family members considerable power.

Bowdren has most of the play’s lines, however, expressing the confusion, then anger, then hurt and finally resignation that Samsa feels trapped inside this beetle-like body that repulses everyone around him, most especially his own family members.

For nearly a century Kafka’s conception of this involuntary transformation has captured the public’s imagination. Meier’s adaptation and Bowdren’s performance give this fascination still more juice.

Kafka has become one of those high-profile names everybody knows, often without knowing anything specific about his work. The Rogue does Tucson a valuable service here, presenting Kafka’s imagining of what it can mean to be suddenly isolated from one’s own life.

Now you can feel literary without having to read anything.

“Kafka’s Monkey” opens the evening.  This tour de force monologue is delivered by Patty Gallagher wearing lightly suggested ape-like face makeup and formal tails to address “members of the academy” about how she cleverly made the transformation from ape to human.

The hour-long stage piece is a 2009 adaptation by Irish playwright Colin Teevan of Kafka’s 1917 short story “A Report to an Academy.”

Essentially, the report describes how the ape (named Red Peter by its European captors) avoided a life of captivity in a zoo or slavery as a musical hall’s performing monkey by quickly and carefully imitating the manners of all the human beings it observed.

The ape has no interest in becoming a human, but only in avoiding captivity. Yet, to achieve some measure of freedom the ape must give up a portion of its own identity by constantly pretending to be someone completely different.

At the time of the story’s publication, some thought it was meant as a satire of Jewish assimilation into European culture. Others saw it as suggesting the path of human evolution.

Although Kafka died in 1924, the structure of the story is certainly prescient, applying these days to problems of racial identity and the integration of culturally disparate people.

Posted by TucsonStage.com at 4:17 PM