"ON THE ROAD" HAS LOTS OF SURFACE 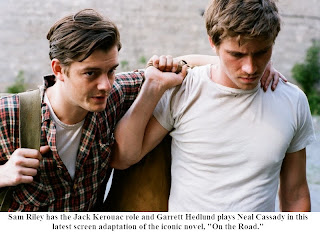 The earliest Beat poets, writers and free thinkers did not live the Beatnik lifestyle. The term Beatnik wasn’t even known until several years after the Beats had become an established phenomenon of cultural contrarians.

The publication of Jack Kerouac’s “On the Road’ in 1957 was essentially a diary of his travels back and forth across the country with charismatically compulsive Neal Cassady during the late 1940s. Now Brazilian director Walter Salles’ adaptation of “On the Road” is playing at the Loft Cinema 3233 E. Speedway Blvd.

Kerouac was declared incompatible for military service when World War II began, so he served in the merchant marine, hanging around the Columbia University campus (where he had been a student on a football scholarship in 1940) between assignments.

Cassady, who was four years younger, had already been a convicted juvenile delinquent (car theft) by the time he was 18 in 1944.

With the war over, all of American continued to joyfully celebrate the triumphant American Way of Life. Everybody believed this was the greatest country in the world.

There was little understanding of any nonconformists who didn’t want to join the party. They were just a bunch of losers in a land of plenty.

During this time Kerouac was working on drafts of “On the Road,” experimenting with stream-of-consciousness writing. It was the rise of the Beat movement since the early 1950s that led a publisher to finally take a chance publishing “On the Road.” Readers loved it, of course.  Free love, the open road and complete irresponsibility make a heady cocktail.

Unfortunately, all this backstory doesn’t get on the big screen in “On the Road” as Salles has directed it from a script by Jose Rivera (“The Motorcycle Diaries’). Salles and Rivera focus on what is actually in Kerouac’s book, with its late-1940s settings of wide open spaces plus occasional stops in Denver.

Less than three years after Hiroshima there were no Beats shouting down The Man, upsetting proper folk and matching wits with academics who keep insisting big government and corporate America are not the enemy.

What we get is a surprisingly un-magnetic Garrett Hedlund (“Tron: Legacy”) in the Neal Cassady role of Dean Moriarty.  There is none of the electric are-they-or-aren’t-they sexual tension between Dean and Sam Riley in the Jack Kerouac role of Sal Paradise.

We know Kerouac was so completely in thrall to Cassady, we have the books to prove it. But nowhere in this screen version do we see either man hungering after the other. Even more disappointing, this Dean Moriarty doesn’t have the magnetism to be the Pied Piper who could save the best minds of this generation from self-destruction at the hands of lock-step conformity.

One guy who does nail his part is Viggo Mortensen as the rail-thin William S. Burroughs role of Old Bull Lee. Much older than the other Beats, Burroughs saw them only as kindred souls of a sort.

Mortensen gets that. His portrayal keeps plenty of space between his life and those restless Beat searchers who couldn’t begin to name what they were looking for. If only Dean and Sal could have done the same.

Posted by TucsonStage.com at 11:20 AM