A BRIGHT JAZZ FUTURE IN "HAYMAKER" 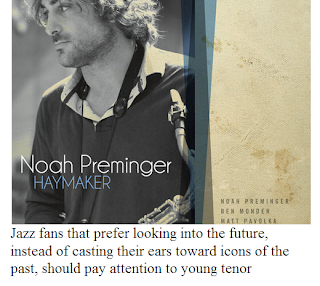 Jazz fans that prefer looking into the future, instead of casting their ears toward icons of the past, should pay attention to young tenor saxophonist Noah Preminger.

Eschewing the angry and the atonal, Preminger lives in the wonderland of lyrical lines swirling with modern scales that boast their eagerness to define the golden mean of jazz. Good taste is even more tasty when he does it.

Continuing to evolve from his last CD, a ballad tribute titled “Before the Rain,” Preminger steps fully into the spotlight with this 10-track recording of seven originals plus the Broadway hit “Tomorrow” (from “Annie”) full of languid poignance with a dash of rue.

In a tribute to Preminger’s artistic vision, he also takes “Don’t Drink the Water” by the Dave Matthews Band and presents it perfectly in a piece with the rest of the album.

This is a jazzman who lives the big city sound, a combination of sophistication and nonchalance you don’t get driving around in an air conditioned automobile listening to satellite radio.

Bring back Coleman Hawkins, Ben Webster and Lester Young, give them an edge of dissonance and a jittery wariness of daylight, and you will get the richness in Preminger’s tone. Listening is such a richly complex experience it can feel like reading the description on a wine label.

My personal favorite is his re-casting of “Tomorrow” with all the sentiment wrung out, admitting to the heartbreak of reality but refusing to bend. Knowing it will be a few hours before tomorrow gets here, anyway, and there’s still a lot that could happen.

On all10 tracks, Preminger’s soul mate companions in the band –Matt Pavolka, bass, Colin Stranahan, drums, and Monder, guitar – don’t accompany him so much as they participate with him. There will be long passages without any drums, or any guitar or bass, or tenor sax for that matter, yet the song itself is propelled along by a force felt by the full ensemble.

As for that title track, “Haymaker,” the band leader/composer explains that “according to Webster, a ‘haymaker’ is a wild knockout punch – something direct, with some force to it.”

Just like this new album, a bold swing into the future of jazz. Grab a free sample at www.noahpreminger.com

Posted by TucsonStage.com at 4:07 PM