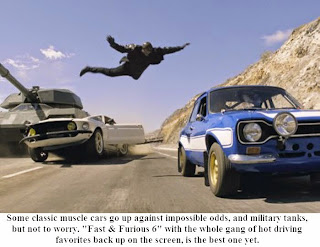 Yes, it is true. Defying not only all the odds but also all the meaningful laws of physics that pertain to automobiles, “Fast & Furious 6” actually is the most entertaining entry in this long-running high octane collection.

Justin Lin, who took over directing the series with “Tokyo Drift” way back in 2006 keeps coming up with new ways to crank up the intensity. He also knows how to continue plumbing the psychological depths of Vin Diesel and Paul Walker playing those lead-foot pals of internal combustion intrigue, Dom Toretto and Brian O’Conner.

Not to mention, pulling the right strings so granite-faced Dwayne (The Rock) Johnson can act tough instead of act ridiculous. When it comes to earning big box office never underestimate the market value of Justin Lin’s directorial skills.

Yes…there is a strong element of the same endearing qualities we love in those Road Runner cartoons with Wile E. Coyote.

But who can resist the rumble of powerful engines enhanced by modern theater sound, the feeling of speed edited right into one incredible car crash after another. There’s lots of side-by-side careening up and down narrow mountain roads, as well.

Sure there is a plot, but…well.

First we find Dom retired and living quite comfortably in the shabby Mediterranean  elegance of the Canary Islands, while Brian is happily becoming a responsible father in Los Angeles.

A quick shift takes us to the European  problems of CIA uberagent Luke Hobbs (Johnson), finding him in need of some world class back-up – as in Dom and Brian with their specialist pals Roman (Tyrese Gibson), Tej (Chris “Ludacris” Bridges), Han (Sung Kang) and Gisele (Gal Gadot).

It does take a little while and several totally amazing automotive antics to get everyone on the same intoxicating lap of energized adrenalin; but once they are the race is on.

Nothing to do but sit down, strap in and shut up. Let these professionals take over the driving so you can enjoy the ride.

Posted by TucsonStage.com at 5:38 PM