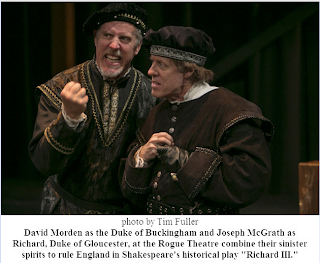 Close at hand is David Morden as Richard’s bloody accomplice, the Duke of Buckingham. These two are so convincing as actors, the famous scene where Richard finally goes too far in his bloody ambitions and the Duke pulls away from him becomes the evening’s most powerful moment.

Matt Bowdren stands tall as the Earl of Richmond who leads the forces of good, amassing his army off stage while we watch as Richard begins to lose his grip on the crown.

We know the worst is nearly over and the end is near when Richmond appears to confront Richard in battle -- the one where Richard nearly defeated famously shouts “A horse, a horse. My kingdom for a horse.”

Giving the women a strong presence are Susan Arnold as the Duchess of York, Cynthia Jeffery as  Queen Elizabeth (Queen to Kind Edward IV), Kathryn Kellner Brown as Queen Margaret and Marissa Garcia as the long-suffering Lady Anne, forced by politics to later marry Richard although he was responsible for the death of her husband.

Shakespeare plays are always famous for their body counts, leaving the final scene strewn with bodies and remorse. But Richard is more of a serial murderer, going down the line eliminating those who next present the most dangerous threat. As Richard’s personal body count rises, vengeance begins to foment.

Appearing on a balcony above and behind the stage proper, the three members of Odaiko Sonora play several large drums and other percussion instruments.  In this setting the drummers give a hearty battlefield atmosphere to the royal conflicts taking place below them.

What’s remarkable is how much those drums add to the foreboding atmosphere that clouds and clogs the minds of this royal court. Whether it is a racing heartbeat, a clash of arms or the sudden silence of no heartbeat, it is impossible not to respond.

“Richard III” continues through May 12 at the Rogue Theatre, 300 E. University Blvd., with performances at 7:30 p.m. Thursdays through Saturdays, 2 p.m. Sundays. Plus a 2 p.m. matinee on May 11. Pre-show music 15 minutes before every performance.

Posted by TucsonStage.com at 12:05 PM