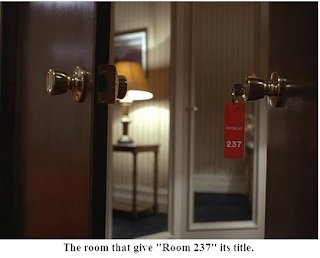 Imagine you are isolated-mountain-cabin-sitting for a friend for the entire winter. There is no TV service and only one video in the whole house – “The Shining.”

After a couple of months watching “The Shining” several times a day, you will begin talking like the people in Rodney Ascher's unique documentary “Room 237,” now playing at the Loft Cinema, 3233 E. Speedway Blvd.

Take that title, for example. At the hotel where Jack Nicholson gets extremely hacked off in Stanley Kubrick’s adaptation of Steven King’s popular novel, room 237 was the hotel room where many strange things occurred. We see the number on the door and on the room key.

But it could have been room 236, or 238 or room 403. The number was irrelevant to the movie – unless you were Kubrick the eccentric genius (said to have an IQ of 200), fond of putting clues in seemingly innocuous places that pointed to hidden messages.

Remember Kubrick’s 1968 classic “2001: A Space Odyssey?”  Well, some say it was Kubrick who also created and filmed the U.S. astronauts’ fake landing on the moon. His research and development for that project was done during the filming of “2001.”

And…wouldn’t you know…the mean distance from the Earth to the moon is exactly 237,000 miles.

Another theorist found considerable evidence Kubrick intended the film to be a harsh criticism of the U.S. government’s attempted genocide of Native Americans.

Another thought Kubrick (also respected as a scholar of German history) was clearly reminding his audience about the horrors of the Holocaust.

To document this intellectual descent down the cinematic rabbit hole of symbols and metaphors, Ascher located five people with solid reputations as academicians and historians who also love conspiracy theories and Kubrick’s fascination with subliminal messages.

Their narration is played as voice-over, while Ascher fills the screen with excerpts from “The Shining” and clips from other films that seem to sort of portray what the narrators are saying.

Really, though, the value in watching “Room 237” doesn’t have anything to do with the veracity of these interpretations. No matter who you are, a few of the theories will have more than a whiff of truth.

Once you start thinking, “Well, OK, that one might be a little bit true” you are on a slippery slope. It’s easy to start wondering what other clues are out there. How many hidden facts are floating by like notes in a bottle, desperate cries for help coming from within a heavily censored society?

Maybe there aren’t any, but…that doesn’t sound quite right either, does it?

Posted by TucsonStage.com at 6:46 AM