SOMETHING IRON THIS WAY COMES 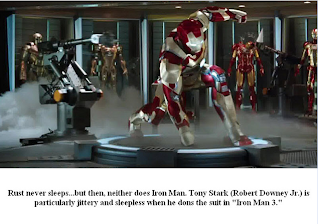 Now that Tony Stark (Robert Downey Jr.) has established himself as the smarty pants superhero loved by millions, the rest should be easy.

New director Shane Black (who did direct Downey in 2005’s “Kiss Kiss Bang Bang”) figures he’ll just keep blowing up bigger and bigger piles of stuff in more and more imaginative ways until the movie’s over.

Black has also let the quaking, shaking soundtrack spend most of its time in the db red zone, too, rattling theater speakers at rock concert levels. The audio and visual effects are so excessive it’s a wonder the marquee over the box office isn’t required to carry a warning label.

If movie theaters still had ushers, spending their workday surrounded by such excessive noise, they could file a workman’s compensation claim protesting unsafe working conditions.

Unfortunately, when everything is overdone, nothing makes an impact. Black must have figured he could send this entire sensory overload into hyperdrive by slicing every scene into quick cuts that often made watching feel like trying to read a shredded newspaper.

Which in its own way is kind of thrilling, but also kind of exhausting.

The seeds of arrogance are planted in the first scenes of “Iron Man 3,” which takes place in 1999, when Stark willfully ignores wild-eyed, long haired scientist Aldrich Killian (Guy Pearce) who claims to have a brilliant invention.

Flash ahead to the present day when a depressed and distressed Stark is having problems with his fully enhanced wardrobe of iron suits.

Which is about the same time another wild-eyed maniac bearded man looking remarkably like Osama bin Laden but calling himself the Mandarin (Ben Kingsley) hacks into all the nation’s television broadcasts simultaneously to threaten world peace.

Mercilessly the Tony Stark lair is attacked and destroyed. Let the explosions begin.

About two hours and $200,000,000 of wide-screen pyrotechnics later, world peace is restored – at least enough to set up the possibility of Iron Man making his return in a couple of years to a theater in your neighborhood.

Posted by TucsonStage.com at 4:22 AM