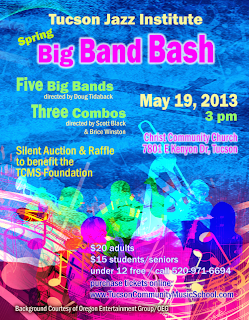 One of those five big bands directed by Doug Tidaback is the Tucson Jazz Institute’s Ellington Big Band, freshly returned from being named Best High School Band in the nation after performing on stage in the Essentially Ellington competition in New York City’s own Lincoln Center.

Now is the time for Tucson’s audience to hear how they did it, note for note! From the Baked Apple to the Big Apple as hopeful contestants and back again to the Baked Apple as conquering heroes, these teen musicians are the apple of our eye...and our ear..

Lee’s performances as singer, pianist and saxophonist were such crowd favorites he was given a special triple threat award, called The Tripler. No one in the history of this competition has won such an award before.

Additionally, the Ellington Big Band took home trophies for having the most outstanding trumpet section and trombone section.

After that, there weren’t too many trophies left for the other 14 bands in the high school category to share.

Posted by TucsonStage.com at 6:32 AM