"ROW AFTER ROW" A BATTLE OF IDEAS 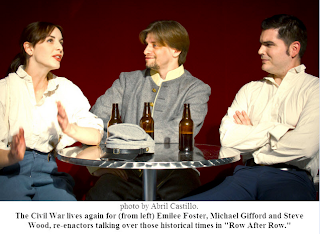 Feminist politics and traditional values get a good massaging in “Row After Row,” a play by Jessica Dickey receiving its world premiere in the Winding Road Theatre Ensemble production downtown at Beowulf Alley Theater.

The set-up has two nicely traditional men who enjoy taking part in the annual re-enactment of a famous Civil War battle at Gettysburg accidentally meeting up with a young take-no-prisoners feminist who is participating in the ceremonial re-enactment just to see what this all-male activity feels like.

While Winding Road’s production is being billed as the world premiere, it should really be called a work in progress. The dialogue definitely doesn’t feel ready for prime time.

Glen Coffman as director gives the play as much life as he can, with full performances by the cast of Emilee Foster, Michael Gifford and Steve Wood. But much of the dialogue isn’t really dialogue. Many of the lines feel more like people making polemical statements rather than people talking.

There is no plot in the conventional sense of the word, no real character development or emotional arc to follow.

Philosophically, there are some interesting points being explored. First of all, we can agree that valuing traditions does give any society more stability.

So here are the Civil War re-enactors, Cal (Gifford) and Tom (Wood), believing in the value of historical research regarding the uniforms, weaponry and military strategies in this battle. It is their chance to dive into a time when men were men, women were women and everyone was white.

Enter feisty Leah (Foster), who dons a uniform and takes part as if she was a guy. It is her first year at this, she’s just experimenting. When Cal and Tom insist all the Civil War soldiers were men, Leah is equally insistent some were women disguised as men.

There is also the matter of African-Americans fighting on the Southern side. Cal and Tom know that was true, so why not white women fighting as white men?

Not all of these ideas are developed in “Row After Row,” but they could be developed in earnest discussions after seeing the play. The playwright finds similarities in the two time periods 150 years apart and plows the ground to turn over staid political conventions and hopefully make something grow.

Which ideas pop up and thrive will be up to the audiences.

“Row after Row” continues through May 5 at Beowulf Alley Theatre, 11 S. Sixth Ave., in performances at 7:30 p.m. Fridays and Saturdays, 2 p.m. Sundays. Tickets are $20, discounts available. For details and reservations, 401-3626, www.windingroadtheater.org

Posted by TucsonStage.com at 8:34 PM