MANY SHADES TO "THE RELUCTANT FUNDAMENTALIST" 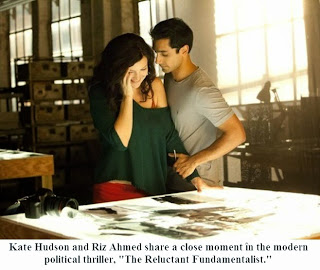 Always pursuing some obliquely aimed objective,  this time Nair (“Monsoon Wedding,” Mississippi Masala”) wants to sort out the various allegiances forced into play by the World Trade Center attack of 9/11 and America’s subsequent military adventures in the Middle East.

Her display of tangled strategies propelled by Pakistan’s eye-for-an-eye demand for vengeance become a fascinating emotional pallet – made terrifying by knowing our country’s own military might has been subdued by such Lilliputian forces.

“If this is what it’s like in Lahore, Pakistan, the country’s capitol and most modern (we assume) city, just imagine the hopeless cloud of misunderstanding that befogs U.S. forces in Afghanistan, Iran and Iraq,” is the thought that will keep running through your head.

Nair, as always, tells her story through the faces of friends and family. The film is based on the acclaimed 2007 novel by Mohsin Hamid, which details how Changez an exceptionally bright young Pakistani man who parlays his Ivy League scholarship education into a blazing hot Wall Street career becomes a Muslim extremist after the World Trade Center is attacked in 2001.

Almond-eyed Riz Ahmed plays Changez with astounding confidence, creating a convincing portrayal of a stone-hard finance consultant in a foreign land who actually seems surprised he can give up so much foreign success in order to be proud of his own people, especially his family.

The foil in this piece is Bobby (Liev Schreiber), an American journalist working in Lahore, who is also connected to the CIA. Initially Bobby is at a student café interviewing Changez about his life in the US as a precocious Wall Street genius.

In flashback scenes we see how the high-gloss Manhattan life of Changez abruptly changes after 9/11. He gets harassed at customs, abused by strangers who call him “Osama,” feels suspicion even in his own company.

Gradually the film’s focus changes and becomes a cat-and-mouse conversation between the two men, each admiring the other but also needing to protect their own political interests and personal safety.

Posted by TucsonStage.com at 8:44 AM