"ALL IN THE TIMING" IS ALL IN FUN 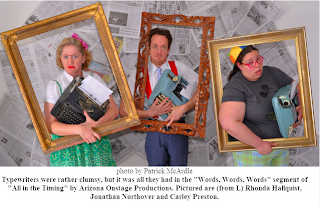 If you are someone who believes American culture has gone to Hell in a hand basket (as folks used to say), further proof is provided in the smart and snappy Arizona Onstage production of “All in the Timing.”

This collection of six wry  pieces –extended skits, really --  were written more than 20 years ago by David Ives, a Yale graduate that New York magazine once named one of the "100 Smartest New Yorkers.”

Successfully produced off-Broadway in 1993, “All in the Timing” just concluded another successful off-Broadway run, proving the pungency of Ives’ intellectual shenanigans.

Because of the mini-play structure, people are always comparing “All in the Timing” to television’s “Saturday Night Live.” In truth, these pieces are much more clever than anything that bunch has come up with in the past 20 years.

Ives actually wrote 14 of these pieces, we are told. All have been well-received wherever they are produced. The ones Arizona Onstage is presenting are: “Sure Thing,” “Philadelphia,” “Words, Words, Words,” “Universal Language,” “Philip Glass Buys A Loaf of Bread” and “Variations on the Death of Trotsky.”

So right away you know, if you don’t recognize the names Philip Glass and Trotsky, this show probably won’t work for you. It is filled with subtle jokes and philosophical observations on everything from the dating game to the arrogance of insisting every person on Earth become fluent in the same language.

That’s another reason to consider Ives as just another smarty-pants with a high IQ.

Of course, we should also remember Arizona Onstage has produced some of the most hilarious trailer trash humor Tucson has ever seen….I’m just saying…

Signing up as directors are Carrie Hill, Sheldon Metz and Eva Tessler. The casting is strong, with all the pieces maintaining equal energy. Some you will no doubt like better than others,  but the differences will be over the semantics.

“Sure Thing” begins in a restaurant with two strangers meeting over the same table. A bell signals it is time for the awkward opening lines of conversation to start over and over and over again.

“Philadelphia” imagines every city has a distinct personality. Los Angeles is laid back and carefree. Philadelphia is obstinate. The message is that wherever you are, affects who you are. So…can living in Tucson warp your personality?

“Words, Words, Words” dramatizes the theory that if a monkey sat at a typewriter long enough, it would eventually type Shakespeare’s “Hamlet.”  Ives imagines what three monkeys would be thinking if they knew they couldn’t leave their typewriter cages until one of them actually did write “Hamlet.”

“Universal Language” contains very little English. Instead, the actors sprout nonsense sounds as if they are words. One actor is the teacher, the other is the student being totally immersed in this new language without any idea of its vocabulary.

“Philip Glass Buys A Loaf of Bread” pokes fun at the famous composer’s pretentiousness then becomes a finely choreographed piece of music itself, using words instead of notes.

“Variations on the Death of Trotsky” is an effectively compressed take on the idea that the iconic communist theorist knew in advance the day he was going to be murdered, but still couldn’t do anything to prevent it.

“All in the Timing” continues through May 19 with performances at 8 p.m. Fridays and Saturdays, 2:30 pm. Sundays, the Cabaret Space of the Temple of Music and Art, 330 s. Scott Ave. Running time is 90 minutes with no intermission.

Tickets are $25 adults, $20 student/senior/teacher/military. For details and reservations, www.arizonaonstage.org  Call 520-882-6574 for information about group discounts.

Posted by TucsonStage.com at 8:33 PM