"TWO INTO ONE" IS LAUGHS ON THE RUN 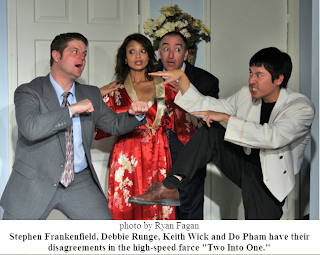 Could the wacky art of British farce become an Olympic sport? Live Theater Workshop makes a zippy case with “Two Into One,” a fast paced and fleet of foot comedy by the English playwright Ray Cooney (“Run for Your Wife,” “Funny Money.”)

Cooney’s many plays are famous for being filled with elaborate complications of mistaken identity trumped by sexual misadventures and myriad frenzies of door-slamming. LTW’s director Missie Scheffman ups the ante by spinning her athletic bunch of actors even faster.

What do you call the next stage beyond “manic?” Half-way through the second act I’m sure this veteran cast officially reached it.

Keith Wick as the speedy schemer George Pidgen always seemed to be in three heated predicaments at once. Stephen Frankenfield playing Richard Willey, a rather randy Member of Parliament, kept popping up in all the wrong places just as often.

Debbie Runge as Willey’s wife Pamela had her own racetrack games going at a red-line pace, determined to have even more affairs than her husband.

But the biggest surprise in a most hilarious evening was the performance of bit player Do Pham as the London hotel’s long-suffering Chinese waiter with no name. A natural physical comedian with an athlete’s nimbleness, this University of Arizona grad shamelessly stole his every scene and the audience happily encouraged him to steal more.

“Two Into One” is not so much a play with acting – it is a play with running. Lots of it, as one secret tryst after another collapses, usually into laughter (for the audience, that is).

Everything starts at the Westminster Hotel in the mid-1980s. No cell phones, no computers, no sexting, thank goodness. These Brits are all so over-sexed on their own, with today’s digital toys in hand they would be spontaneously combusting right on stage.

Willey and his wife are staying in one of the hotel’s finest rooms, but Willey instructs Pidgen to secretly reserve the adjacent room as well. That way, Willey can join his statuesque sweetie Jennifer (also Scheffman) in clandestine comfort.

Manning the hotel’s side of the ledger is Brian Wees as this oh so proper establishment’s manager, a worldly man who has seen it all but is determined not to see any of it in his hotel.

Brightening this balance is the sparkly chambermaid, also with no name, but given a brio-filled personality by Sofia Orduno.

Making fun of pompous politicians is standard fare, to be sure, but Cooney’s manipulations of one crisis situation after another is the point here. Logic is never a part of the equation.

By the end of LTW’s opening night performance, it was the awe of maintaining that crazy pace for nearly two hours that had the audience cheering the curtain calls.

“Two Into One” continues through June 9 with performances at 7:30 p.m. Fridays and Saturdays, 3 p.m. Sundays, at Live Theatre Workshop, 5317 E. Speedway Blvd. Tickets are $18, discounts available. For details and reservations, 327-4242, www.livetheatreworkshop.com

Posted by TucsonStage.com at 12:04 PM