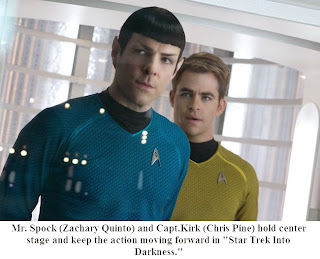 The best news about the briskly energizing “Star Trek Into Darkness” is that director J.J. Abrams will be injecting his own testosterone-driven visuals into reviving the “Star Wars” series in 2015. Abrams’ proven feel for creating battle scenes in outer space is several layers of hyperspace beyond George Lucas.

Abrams has done it twice with “Star Trek.” His 2009 “Star Trek” reboot proved a new generation of imaginative youngsters still wanted to go where no one else has gone before on the big screen. See the IMAX version of “Star Trek Into Darkness” and the screen is even bigger – so is the sound.

Back on the flight deck of the Starship Enterprise are the youthfully obstreperous Capt. James T. Kirk (Chris Pine) and the inscrutably logical Mr. Spock (Zachary Quinto), along with the rest of the 2009 crew giving more depth to their characters for this mission.

The plot is filled with delicious moral dilemmas and a number of genuine cliffhangers whose resolution leads to even bigger cliffhangers. That legendary “Star Trek” balance of action and humanism is kept center stage.

But that’s just the plot. The real emotional connection is in the battle scenes conceived on such a vast scale they could only occur in the limitless reaches of galactic space. They are never  boring and, somehow, never feel repetitious.

Truly, if you need to do a little extra financial planning to get a couple of tickets for an IMAX screening, do it. You and your companion will be glad you did.

Posted by TucsonStage.com at 5:37 PM