PUT YOUR MONEY ON THIS "MILLION DOLLAR QUARTET" 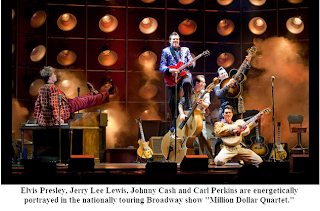 If you recognize the name Sun Records, then you will enjoy the nationally touring production of the Broadway show “Million Dollar Quartet” now playing downtown at the Music Hall. Chock full of early rock ’n’ roll classics presented by an eager cast of actor/musicians, this is one music history lesson that goes down very easy.

Of course if you were wearing blue suede shoes, with a cigarette pack rolled up in the sleeve of your white t-shirt, and saying “Crazy, man, crazy” all the time while hanging around the jukebox in the hamburger joint across the street from your high school, well…

Colin Escott and Floyd Mutrux put together the book that provides the framework for presenting such iconic favorites as “Blue Suede Shoes,” “Folsom Prison Blues,” “Great Balls of Fire,” “Hound Dog” and a few country spirituals such as “Peace in the Valley” and “Down by the Riverside.”

It is a historical fact that in Memphis on Dec. 4, 1956, Carl Perkins had booked the Sun studio, still having difficulty finding a song to follow-up his break-out hit “Blue Suede Shoes.”

Sun Records owner and hustler Sam Phillips had also invited a brash hillbilly from Louisiana, Jerry Lee Lewis, to play some high-speed piano on the date – hoping that might juice up Perkins’ performance.

It just so happened Elvis Presley was in town, bringing his girlfriend Dyanne home to meet his mother, and also brought Dyanne by the studio. That’s when Phillips quickly phoned Johnny Cash, who lived nearby. Perkins and Cash both had contracts with Sun Records. Elvis had moved on to RCA Records, but wasn’t that well established yet.

Most all of this, we are told by bona fide

historians, actually did happen. The songs they sing in “Million Dollar Quartet” are bona fide crowd pleasers and do make a convincing statement for the good time qualities of rock ‘n’ roll -- before it was co-opted by the more sinister qualities of sex and drugs.

Sure, Elvis was a precocious hip-swinger but he doesn’t do much of that in this show. Mostly he’s polite and sincere.

It is wild-haired Ben Goddard as Jerry Lee Lewis who will say or do most anything. He’s filled with uninhibited energy unrestrained by common sense. Tall and lanky David Elkins gives Johnny Cash a dark gravitas that plays well against what seems like his deep family values.

Vince Nappo as Sam Phillips is the guy who is a little smarter and a lot more manipulative than everybody else. But it is these young boys who have all the talent.

The kind of talent suitable for giving Tucson boyfriends and husbands a good reason for inviting the ladies in their lives out to see a genuine Broadway musical.

Posted by TucsonStage.com at 5:19 AM