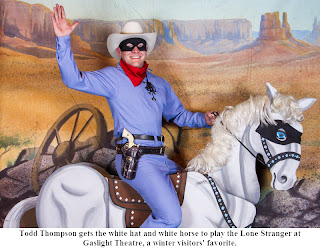 The Lone Stranger is not in the banking business. That would be his brother, the Loan Arranger.

Over on the eastside at Gaslight Theatre “The Lone Stranger or Hilarity Rides Again” sits tall in the saddle to welcome Tucson’s winter visitors with another exciting chapter in the life of this western hero from those thrilling days of yesteryear.

There used to be a famous joke that the true sign of a sophisticate is someone who can hear the “William Tell Overture” and not think of that masked man on a white horse, the Lone Ranger and his faithful Indian companion Tonto.

These days…well…it’s a different story. Political correctness makes it a little awkward to even think there was a Native American who tagged along after a European American and didn’t speak perfect English as preferred by the King of England himself.

Not to get too far afield, however. There is a place in the Gaslight production of this traditional favorite in cowboy lore where the audience is asked to sing aloud that familiar galloping theme. The better they sing it, the faster the Lone Stranger’s courageous horse will run.

For the more historically minded, the first act of this production sets up the dastardly situation that led to the creation of this old-school low-tech super-hero.  (Yes, we know that technically he’s not even a super-hero because he doesn’t have any super-powers…but neither does Batman).

Fair play is having a tough time of it in this little corner of Texas at Diamond Lil’s Saloon where one of the cowboy foremen has just gambled away the whole ranch payroll in a game that looks suspiciously fixed. Also at that card table was the sinister speculator known as Craven.

Also involved are a showgirl, a cowgirl, a hired hand, the town doctor and a more mysterious lad who claims he used to be the Durango Kid.

All actors know the best role in any play is the villain. At Gaslight, David Orley is carving out a fine reputation for himself by creating seething villains who have psychological depth.

Sometimes he might play one of those cousins-shouldn’t-marry roles, which is what he does in “The Lone Stranger.” All the roles are double-cast, but if you are there when Orley is onstage, consider it a bonus.

Act Two is scarcely underway when Cade Winslow fakes his death and swings into serious action as the baby-blue clad Lone Stranger. This is just a guess, but with that fondness for baby blue, could it mean this masked rider of the plains will become one of UCLA’s pioneer super-fans?

Nicely enough, the aftershow olio is based on another old TV favorite, “Hee-Haw.” The stage is filled with bib overalls, flour sack print dresses, goofy hats and wide suspenders.

“Yes, I married Miss Right,” one weary farmer proclaims. “It just took me awhile to realize her first name is Always.”