RUST AND BONE" IS HARD AS STONE 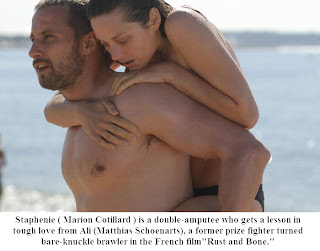 “Rust and Bone” is such a harsh and relentless film, it deserves its own category of love story – maybe, hard love.

French writer/director Jacques Audiard  (A Prophet,” brings the mercurial Marion Cotillard together with the bristly Belgian actor Matthias Schoenarts (“Bullhead”) to prove there are ways a pair of tight-jawed independent spirits can touch each other warmly and without fear.

Maybe not at first, but eventually.

Over the past year or so in the cinema world there has been a tidy little batch of sincerely offered love stories that involved some sort of nearly terminal physical handicap.  That iron lung in “The Sessions” is just one example.

The story of “Rust and Bone” begins with muscular Ali (Schoenarts) nearly mute with rage, a rigid man who earns his living as a security guard and bare-knuckle brawler in illicit matches.  He’s also a single father with a five-year-old son Sam (Armand Verdure). They aren’t particularly close, either.

Riding herd on a nightclub crowd full of spontaneous emotions as a bouncer in the sunny south of France, Ali has kind of a smack-down with an equally uncommunicative female, muscular and confident, whose day job is at the local sea aquarium training orca whales.

She is Stephanie (Cotillard).  Cutting to the chase, arrogant Stephanie is severely injured in a random orca attack losing both of her legs just above the knee in one crunch of the killer whale’s jaw.

No longer arrogant, Stephanie quickly sinks into despair, unable to muster much enthusiasm for her physical therapy. Almost to spite herself, she calls the phone number Ali had given her at the nightclub when she was a completely different person.

Ali the harassed shadow-father with few options for a social life pays her a visit. Her paraplegic condition is no problem. He stuffs her in a bathing suit and hauls her off to the beach. Then he jumps in the water and lets her sit helplessly in her wheel chair.

Tough love is the only love he knows. We can assume it is all she knows, as well. If she can’t be the defiant one, the one in control of the giant orcas, she isn’t anything.

It does take awhile for “Rust and Bone” to reach this point in the story, but the good stuff is just about to begin. Once Ali proves to Stephanie that she can still be defiantly self-confident, she turns it in on him – just as he is starting to find success in the bare-knuckled back alley world of bone breaking matches and reckless gamblers.

The many nude scenes of a beautiful woman without any legs (thanks to a marvelous kind of CGI magic) lose their shock value as Ali’s own insensitivity to others becomes an advantage in his life with Stephanie.

He needs sex. She can provide it. She doesn’t have any other options. He does have those convincing muscles.

Of course any flowers that can take root in such uncompromising soil are going to be quite hardy, but also a little bit different.

Posted by TucsonStage.com at 4:59 PM