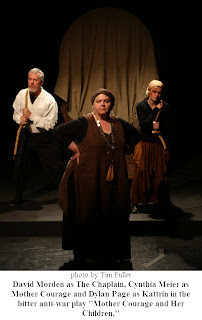 Amoral cynicism may be a valuable attribute for civilian survivors in wartime, but it won’t provide much of a sense of triumph.

The sarcastically named Mother Courage did survive 30 years of war, but not with courage. She ran a camp store in a covered wagon, cynically playing both sides against the middle while dragging that cart across one grim battlefield after another.

But in the end, although she herself survived, she lost everything that should have mattered most to every mother. That is only one of the lasting lessons in Bertolt Brecht’s equally bitter and brilliant anti-war play “Mother Courage and Her Children” given a lusty production by the Rogue Theatre.

Cynthia Meier has the title role, which she embraces with vigor worthy of the most cynical survivor.

A dozen actors play many more roles so the epic tale spreads across an ever-changing moral landscape of winners and losers full of revenge and idealism.

David Morden has some fine scenes as the Chaplin, dead set against killing people…until his own life is at stake. David Greenwood in the comic character role of the rapscallion Cook gets his hangdog laughs and also gets to sing a mock-rap song with modern rhythm accompaniment.

Scholars of Brecht will also find much to admire in this production directed by Joseph McGrath, working with the translation and adaptation by David Hare. This is theater with an intellectual purpose, meant to engage the mind as well as the emotions.

The music, new for this production and always intentionally artificial, is so effectively presented the play itself gains emotional power from the songs.

Violinist Tim Blevins composed the musical accompaniment performed from an elevated corner platform onstage by a quartet of players led by pianist and music director Dawn C. Sellers. Also in the group are Daniel Mendoza and Lorine Sweeney.

Brecht wrote “Mother Courage” in 1939, at the onset of World War II. The playwright was as disturbed by the merchants of war as by the propagandists and politicians who sold their nations on the necessity of war.

To emphasize the importance of his lessons, “Mother Courage and Her Children” begins in 1624 in Sweden where armies are being recruited. Determined to keep her own children out of harm’s way, Mother Courage embraces the war as a business opportunity.

Over the next two-and-a-half hours we follow the rise and fall of various forces, while remembering tart one-liners such as “It takes a war to get people organized,” “War is like love, it always finds a way” and “Nobody started a revolution sitting down.”

Unfortunately, the idea that these merchants of war have built-in job security is even more true today. Although the play is long, try to stay for the Q&A afterward. Brecht had the knack for stirring up people’s thoughts.

“Mother Courage and Her Children” continues through Jan.27at the Rogue Theatre, 300 E. University Blvd., with performances at 7:30 p.m. Thursdays through Saturdays, 2 p.m. Sundays; plus an additional 2 p.m. matinee Saturday Jan. 26.

Tickets are $30, with $10 discount on Thursdays; $15 student rush (with current ID)15 minutes before every performance  For details and reservations, 520-551-2053, or visit www.theroguetheatre.org

Posted by TucsonStage.com at 7:30 AM