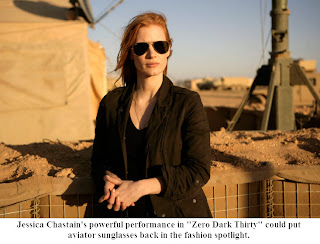 There are two basic ways to look at the controversial Oscar-nominated war film “Zero Dark Thirty.” One is to judge its accelerating parts as you would any other action flick that has a soul-less female as its center.

The other is to see the meticulously researched film as a fairly accurate account of American military helplessness in a modern-day Lilliputian land of angry guerillas pinning down this giant invader.

Feminist activists are already rabid that director Kathryn Bigelow has been passed over as a nominee for Best Director. Meanwhile, social conservatives are livid that one terminally obsessed woman could get all the credit for sniffing out Osama bin Laden’s location.

Overlooked in all the clamor is the truly harsh reality that the U.S. military – having learned in Vietnam the dangers of giving journalists a free rein to report what they see – has so severely clamped down on traditional wartime journalism that 12 years after the start of this war, we have to depend on independent filmmakers to provide a sense of what is actually happening over there.

It was Bigelow and screenwriter Mark Boal who won the big awards in 2009 with “The Hurt Locker” -- about an American bomb squad in Iraq.

So we must absolutely hope this dynamic duo will complete their Middle East war trilogy with one more K.O. punch next year. Investigating the mercenary civilian contractors who allegedly killed so many locals would be good.

As for “Zero Dark Thirty,” it is nearly devoid of patriotic fervor and makes no judgment call on whether or not the torture techniques of “enhanced interrogation” were justified. There is plenty of implied arrogance on the part of the CIA.

A rarely mentioned reason for the lack of American military effectiveness in these Middle East wars is a lack of appreciation for the cleverness of the enemy.

After the end of the Cold War, nobody thought those eastern African countries around the Mediterranean Sea would ever become worthy adversaries. All their war-waging armament came from the Soviets, anyway.

Then members of al-Qaeda flew those commercial American airliners into the World Trade Center.

In the aftermath of that attack, U.S. military triumphs have been rare.

And it turns out all those experts who claimed that killing bin Laden would have no material effect on the war were correct.

But the mystical leader is still dead, and the dramatic raid on bin Laden’s compound in Abbottabad, Pakistan, was taken straight out of the movies, forcing art to imitate life.
So – if we see “Zero Dark Thirty”  as a filmed historic event, it zips right along.

And as a political statement, liberal and conservative foes alike can stake a claim in its box office success.

Posted by TucsonStage.com at 6:41 AM