"SISTER" WILL GRAB YOUR HEART 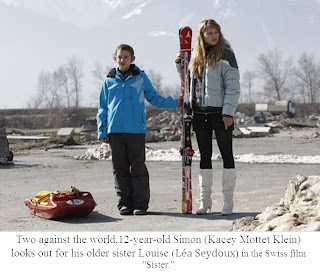 The pain of loneliness is both poignant and palpable in the deeply engaging Swiss film “Sister.” Despite the enigmatic title, this film with subtitles playing at the Loft Cinema, 3233 E. Speedway Blvd., is a satisfying cinema experience. It is Switzerland’s nominee for consideration in this year’s Academy Awards.

Participating in this over-heated season of extreme acting and elevated hopes, “Sister” gains power with it is low key and clear eye from writer/director Ursula Meier (“Home”).

We see in the perpetually haunted face of 12-year-old Simon (Kacey Mottet Klein) that he is also a survivor who trusts no one. Simon lives with his much older sister Louise (Léa Seydoux, ‘Farewell, My Queen”) in a Swiss version of generic project housing.

This particular building stands alone at the foot of a snow-capped mountain in the Urals, topped by a high-toned resort where Europe’s wealthy go to ski the sunny slopes with little regard for their material belongings.

Simon the opportunist catches a cable car up the mountain every morning to spend the day moving inconspicuously about the resort, stealing snow goggles, gloves and other items from bulging backpacks, snatching pairs of skis left racked in stacks outside the fun-filled ski lodges, whatever is handy to grab and go.

Always industrious, Simon sells everything he steals without fear of getting caught. He’s just a kid. If any adults catch him in the act, they give him a stern talk and let him go – after all, he’s just a kid.

And as Simon cynically observes, “They are so rich, they just don’t care.”

What catches in your throat is knowing Simon is stealing all this stuff to help support his older sister. She may be twice his age, but she is also twice as helpless. With no skills, she works mundane jobs she hates that earn very little money.

Often she will hook up with one guy or another, leaving Simon while she spends the night somewhere else. Simon accepts this, though we see the hurt in his face.

Just like all other siblings in the world, they argue, disagree, make trouble, but always come back together.

Meier shows us all this, and the mock bravado each one brandishes like a weapon. The more we see, the more we admire their determination as orphans to fend for themselves and watch out for each other.

The twist is that young Simon is mentally the strongest one, while Louise is the one who needs the most help. Of course, we know their delicately balanced world must come tumbling down. But the heartbreaker is discovering how it happens.

Posted by TucsonStage.com at 6:43 AM