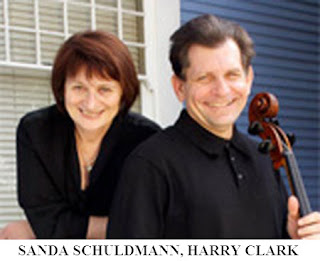 After an absence much too long, the magic of  pianist Sanda Schuldmann and cellist Harry Clark filled the Berger Performing Arts Center in a passionate performance of the Chamber Music Plus work “Confidentially, Chaikovski” written by Clark.

The musical communication between these two flowed ardently as ever, turning the compositions of Chaikovski into an experience beyond wonderful – enhanced by the readings of exceptional guest artists Michael Learned and Richard Thomas.

While Learned and Thomas are best known for working together on the popular 1970s television series “The Waltons,” this is the first time they have worked together since then.

Their timing on the Berger stage remains sharp, reading lines taken directly from a volume of letters between the famous composer (Thomas) and Nadezhda Philaretovna von Meck ( Learned), the patron who was nine years his senior.

While this correspondence from 1876 to 1890 developed into an intense affection, the two agreed they should never actually meet. This Old World tension has a unique resonance in today’s world of internet friendships between couples continents apart who never actually meet, either.

Clark has created “Confidentially, Chaikovski” using some of his most beloved melodies. Hearing these themes presented within their classical context written straight from the heart added aura to the entire performance.

Followers of Chamber Music Plus are already making plans for the next opportunity to hear Schuldmann and Clark play together in concert. That is March 3 in Grace St. Paul Episcopal Church, 2331 E. Adams St., at 3 p.m.

“We intend to feast on Couperin, Schumann and Prokofiev,” say the two artists. The program will include a number of transcriptions -- some done by the composers, and some by Schuldmann and Clark.

This concert was originally set for last November but had to be rescheduled. Tickets sold for that event will be honored at this performance. For additional details, www.chambermusicplus.org

Posted by TucsonStage.com at 5:23 AM