YOU MUST SEE "AUGUST: OSAGE COUNTY" 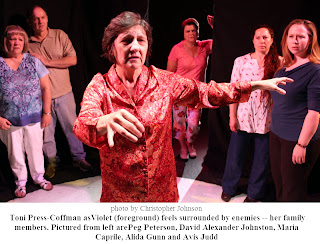 Just like the Artful Dodger, they know it is harder to hit a moving target.

And Glen Coffman, director of a most excellent Winding Road Theater Ensemble production of this 2008 Pulitzer Prize winner makes them all seem like they need a good bull’s-eye.

Describing this play as “a dysfunctional family drama” isn’t nearly enough. Letts has taken the rudderless Weston family of Oklahoma’s desiccated plains near Pawhuska to represent the dissolution of the American family.

Here in the heartland of the United States, there is no Pa to be the man of the house, that benevolent leader willing to make all the hard decisions after serious counsel with each member of the family.

There’s no Ma, either, using her wily wisdom to guide Pa carefully through the shallows of everyday danger.

The Winding Road production with a running time of well over three hours gives the Weston family’s father figure just a few minutes of stage time right at the beginning. Tall and broad shouldered Roger Owen plays Beverly, the man of the house. But within a few minutes, Beverly has become a suspected victim of suicide offstage and we never see him again.

Winding Road’s production belongs to Toni Press-Coffman playing Beverly’s drug addled wife Violet with a fearless performance that is her best ever.

She is screaming, ranting, sobbing, cowering and fighting back against an endless string of domestic skirmishes that become a defining list of all the reasons American family life has deteriorated so quickly since the Saturday Evening Post stopped publishing.

Divorce is at the top of the list. So is a lack of shame when bad things happen. Recreational drugs for teens and over-prescribed pain-killing drugs for the older set fuel all ages indiscriminately.

Alcohol is also in there like an old school favorite, proving there are some classic forms of self-medication that can still do the trick.  There’s plenty more on Letts’ shopping list of ills for which families have no remedy.

Yet Coffman keeps all these confrontational parts moving so quickly with such solid footwork this production must be declared a huge success.
Whether you can deal with all the anger and emotional hurt that takes place on stage is another matter.  Coffman has unleashed the play’s power.
That’s his job.

Rivaling Press-Coffman as Violet the mother is Maria Caprile as Barbara, the bitter daughter. Many times both women go at it toe-to-toe, neither one giving an inch in their personal fight for survival.

The cast of 13 is a well chosen assembly of balanced talents. Despite the large number, there are no place-holders just filling in a part.
Equally sprawling is the stage design by Fred Rodriguez, using realism that adds starch able to shape and contain domestic difficulties that threaten to become absurd – if only they didn’t reflect our own lives in some way.

Posted by TucsonStage.com at 5:24 AM