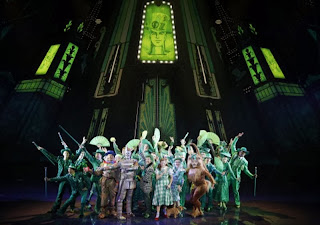 The Emerald City looms large over Dorothy and her companions in "The Wizard of Oz."

The Land of Oz looks a lot more modern than it used to. The munchkins are taller, too. Andrew Lloyd Webber has zipped the classic 1939 movie straight onto theater stages of the 21st century, riding on the hot wheels of scene and costume designer Robert Jones.

“The Wizard of Oz” presented by Broadway in Tucson for a week of performances in Centennial Hall at the University of Arizona whips up a stirring blend of digital special effects combined with the familiar story and short renditions of the film’s favorite songs by Harold Arlen and Yip Harburg -- although Webber does save the best showcase moments for his own compositions, with lyrics by Tim Rice.

But it isn’t likely any children in the audience will be getting bored. The pace is quick, the atmosphere genuinely contemporary. Instead of employing elaborate set pieces to create each scene, wall-to-wall scrims at the back of the stage and in front of the stage become movie screens on which are projected the most fanciful designs.

This “Wizard” is family theater at its best. Giving young people a tangy taste of the magic that’s possible behind the curtain and giving grown-ups a frothy interpretation of a story they have loved all their lives.

Whether we are in Kansas or in Oz, or in the darkly dangerous countryside beyond Oz where the Wicked Witch of the West (Julia Juhas) deploys her squadrons of flying monkeys, it always feels like anything is possible.

In the program notes, Jeremy Sams the director also gets a co-credit with Webber for the adaptation. This became important as the opening night performance continued, for the dramatic stage sets and special effects often outshone the work of Danielle Wade as iconic Dorothy and Jay Brazeau as the magical Wizard.

Not that their performances were lacking in any way. The stage sets and special effects designed by Robert Jones are just so strong.

Even though the famously flying monkeys aren’t zipping around like Spider-Man, they do get a pretty effective treatment in digitized smoke and mirrors as the costumed monkeys on stage are transformed to scrim-projected images of high-speed monkey-like blurs that fit right in to the rest of the attack scene.

The Wicked Witch of the West does melt down into a puddle of water. Glinda the Good Witch (Robin Evan Willis) doesn’t arrive in a lovely bubble, like in the movie, but she still looks lovely and glows with goodness.

The avuncular Wizard does depart from Oz in a hot air balloon, rising up from the stage and disappearing out of sight.

But, really, going down a checklist comparing this “Wizard of Oz” to the movie isn’t the point. (Well, it might be for parents and grandparents.)

The point is to fill the story with a modern-day feeling of seeing Dorothy’s discoveries about the importance of home, as well as meeting the Tin Man (Mike Jackson), the Scarecrow (Jamie McKnight) and the cowardly Lion (Lee MacDougall) and, of course, learning the importance of facing fearful adversity.

Posted by TucsonStage.com at 2:40 AM