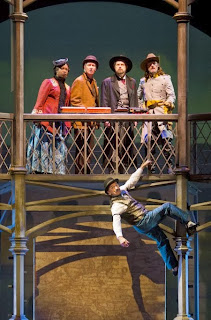 Resourceful Jean Passepartout (Jon Gentry) dangles from the railing to save the others on this unforgettable trip..

It is the journey, not the destination, that gets everyone’s attention in Arizona Theatre Company’s uptempo production of Mark Brown’s stage adaptation of Jules Verne’s 1873 novel, “Around the World in 80 Days.”

Please note: this is not a stage version of Mike Todd’s classic 1956 movie (which featured a hot air balloon).

Brown’s version is built more along the lines of “The Mystery of Irma Veep” and “The Thirty-Nine Steps” – which ATC has also mounted successfully in previous seasons. In all three plays, a handful of actors play a room full of characters, with myriad accents, eye-blinking costume changes and clever props adding to the comedy chaos.

However, there isn’t a hot air balloon in this production.

There are plenty of crafty stage effects. On opening night at the downtown Temple of Music and Art a vigorous cast of five in this multi-cultural road show kept the pedal to the metal.

As directed by David P. Saar of Childsplay theatre in Phoenix, Phileas Fogg (Mark Anders) maintained that stiff British upper lip confronting more perils than Pauline in his determination to win the infamous wager of 20,000 pounds sterling, betting that he could circumvent the globe in a blistering 80 days.

Anders only plays one person, the determined Phileas, but swirling around him (literally) are Bob Sorenson, Jon Gentry, Yolanda London and Kyle Sorrell playing some 38 characters dedicated to creating kinetic onstage chaos. The clear audience favorite in all this jumping around was the extremely resourceful Jean Passepartout (Gentry), that ever-so-proper French manservant to Phileas Fogg.

Longtime Tucson favorite Sorenson, who had many of the roles in ATC’s production of “Irma Veep,” has the clearly identified role of Scotland Yard’s Detective Fix -- along with also being a priest, a train conductor in India and an elephant owner. It is the detective who feels duty-bound to pursue Phileas through every difficulty and meet every challenge with snowballing amounts of pure grit.

Also popular was Yolanda London, who had all the female roles (and a couple of male ones). But her most identifiable guise was the Indian princess Aouda.

The itinary for this pressure-packed adventure heads east from London, with complicated stops (one involving an elephant, another a monsoon storm) strung from Bombay to Calcutta to Hong Kong to Yokohama and across the Pacific to San Francisco. Getting to New York required a train ride across the great American west, an attack by a band of Indians, jumping the train over a weakened train trestle and riding an improvised wind-powered snow sled across more wilderness.

Containing all these hazardous adventures with remarkable versatility is the two-tiered stage set full of Victorian flavors designed by Carey Wong. Karen Ledger gets credit for those amazing costumes.

“Around the World in 80 Days” continues through March 22 with performances at various times Tuesdays through Sundays. Tickets are $37-$67; $10 for students; when available, half-price rush tickets one hour before curtain. For details and reservations, 520-622-2823, www.arizonatheatre.org

Posted by TucsonStage.com at 3:29 PM