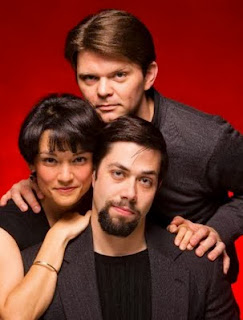 All the long pauses, awkward moments and tense interruptions that are in the DNA of Pinter’s playwriting have the room to open up and breathe on Rogue’s stage.

Credit the cast of Ryan Parker Knox, Marissa Garcia and Matt Bowdren for bringing all three dimensions of life to the love triangle that is based on Pinter’s own experience.

The poignance that we feel in the emotions of these three is heightened by the playwriting structure Pinter uses. He constructs a framework of nine scenes presented without an intermission. We begin in the present – when Jerry (Knox) learns that his best pal Robert (Bowdren) has known for years that Jerry was having an affair with Robert’s wife Emma (Garcia).

Each subsequent scene works its way back toward the beginning of that affair, peeling off more layers of emotion, revealing still deeper layers of  still more raw feeling, as Robert keeps refusing to face that which he cannot face.

Jerry, meanwhile, bubbles along believing he is protected by his best pal’s ignorance of this unholy indiscretion.

Although the Rogue’s play program doesn’t name a time period or setting, Pinter’s actual experience took place between 1968 and 1977.

Joseph McGrath’s brilliant set design of red, black and white appropriately suggests a chess board of strategies at a time when sexual liberation was in the air, but loyalty and traditional marriage vows still held sway.

These days that kind of buddy loyalty feels rather Old School. Pinter’s play and the Rogue’s commitment to the arts make that kind of idealism feel timeless.

And the betrayal of that idealism feels heartbreaking.

The ensemble work of Bowden, Garcia and Knox is pretty much flawless. Patrick Baliani as a rude waiter in a restaurant near Venice provides some welcomed comedy relief.

But what makes this production of “Betrayal” important is not the story. It is the actors’ creation of a specific feeling, a guy’s need to have a guy friend who could become, under certain circumstances, more important than the guy’s own wife.

The power of this relationship, and the expected dedication of a wife’s loyalty, may seem dated in today’s more fluid attitudes toward sexual relationships.

But for audiences of a certain age, especially those who appreciate the swirl of artistic experience, this production will be a convincing reminder of the power that is contained within the English language.

Posted by TucsonStage.com at 8:04 AM