"I LOVE LUCY" IS REAL AGAIN 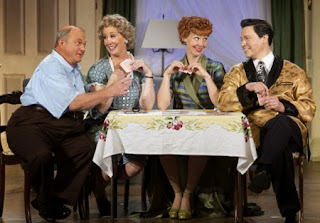 Everything looks like it did 60 years ago on the set of "I Love Lucy."

Do some time traveling, get a ticket to “I Love Lucy: Live On Stage.” Broadway in Tucson brings this touring showcase of happy nostalgia with detailed accuracy to Centennial Hall for daily performances through Sunday, March 30.

Everyone who has loved Lucy over the generations will find plenty to like in this production. The show is a recreation of two “Lucy” episodes: “The Benefit” from 1952 and “Lucy Has Her Eyes Examined” from 1953.

While the shows themselves are from the early 1950s, reflecting a radically different time and style of situational comedy, their relevance has spoken to every generation since then. Thanks to TV syndication,  “I Love Lucy” has become as timeless in its own way as Charlie Chaplin, Buster Keaton or the Three Stooges.

To set your chronology watch, in 1952 Johnny Ray was a hot new star dominating the pop charts with his heart-wringing performances of “Cry” and “The Little White Cloud That Cried.” Rock ’n’ roll hadn’t been invented yet.

Lucille Ball was just getting started, too. With hubby Desi Arnez they would film 179 episodes for television broadcast. Those shows have been running in syndication ever since, for more than 60 years.

“I Love Lucy: Live On Stage” wants to create nothing less than what it felt like to be sitting in the audience while a pair of “Lucy” episodes were being filmed – complete with retakes for a couple of flubbed lines.

In the show, Maury the Desilu Studio host (Mark Christopher Tracy) explains these edited episodes will be broadcast in three weeks, so people in the audience tonight can be at home watching these “Lucy” shows on TV with their families and hear their own laughter.

The attention to detail in “I Love Lucy: Live On Stage” is rather astounding. Sirena Irwin has done some serious analysis of Lucy’s gestures and body language, even her vocal inflections and tone of voice. To say Irwin becomes Lucy is pretty much what happens.

Bill Mendieta isn’t quite as successful as Desi Arnez playing Ricky Ricardo, but he does project a striking persona. When he sings “Babalu” with an onstage orchestra in Latin costumes, the picture is perfect.

And just like they did on the real television show, Lucy’s  buddies Fred and Ethel Mertz steal a lot of scenes. They are played by Kevin Remington and Joanna Daniels.

To enhance the studio experience a chorus of eight nattily attired performers in period fashions does some singing, dancing and tributes to popular commercials of the times. It will be a little bit startling for people of a certain age to realize they know all the words to jingles for Halo shampoo, Brylcreem and speedy Alka-Seltzer.

What: “I Love Lucy: Live On Stage”

Presented by: Broadway in Tucson

Where: Centennial Hall, 1020 E. University Blvd. on the University of Arizona campus

Posted by TucsonStage.com at 4:22 PM