SINGING CAVE PEOPLE ARE DANCING, TOO 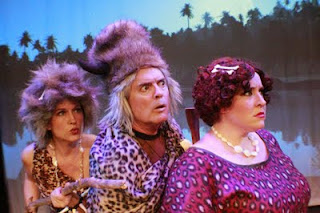 “Quest of the Cavemen” written and directed by Sean MacArthur continues the growth of the Great American Playhouse in its rookie season as the first full-time theater in Oro Valley.

Building up its old time melodrama traditions, this game cast takes its audience back to the era of cave dwellers – a golden age for all-natural diets, unadulterated by chemical processes and genetic engineering.

The female cavepersons we meet are enlightened, as well. Already we hear Ork (Michael Claridge) pining for the good old days when he could just drag women by the hair into his cave, nice and simple.

But fire is a pretty new idea. When one of these little bands steals a pot of smoke and flames from a more innovative group of underground dwellers wearing animal skins (which wasn’t considered politically incorrect at the time), everyone’s lives are threatened.

Exactly why they are threatened isn’t clear. For while there is a lot of animated gesturing and jumping around onstage, there is difficulty following the plot. Not that it matters too much.

Pianist and music director Mike Padilla cues the house whenever a hero or villain is taking center stage. Vigorous cheering and booing is always encouraged at the GAP. Everyone is guaranteed a happy ending, as well.

And really, though the actors’ motivations may be murky the jokes are pretty good. In this context, puns are a favorite. Often times, the corniest ones get the biggest response.

For example while seeking an oracle’s advice, Rube (Nick Seivert) one of the tribal leaders, learns that “The early bird may get the worm, but it is the second mouse who gets the cheese.”

Maybe you just have to be there.

Time after time, Nancy La Viola’s choreography fills the stage with dancing citizenry of a prehistoric nature. Several song favorites from the 1970s get rousing renditions, too, while a spinning disco ball reflects on the dancing.

Appropriately enough, the after show olio is a “Tribute to Irving Berlin: No Business Like Show Business.” From “Alexander’s Ragtime Band” to “God Bless America” the nine-member cast gives 10 songs a straight-ahead choral treatment that encourages singing along.

Posted by TucsonStage.com at 9:08 PM